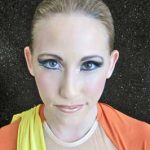 EGYPTIAN MAKE UP “Cleopatra”
Applying Ancient Egyptian Makeup to create Cleopatra, especially Egyptian Eye Makeup, can take a little practice.  It can help to understand the history first. In Egypt during the time of Pharaohs was more than just a beauty ritual. Both men and women sought youthful beauty and used many cosmetics and skin care products to enhance skin tone and radiance. Egyptians believed makeup had magical powers. Black Galena Khol was used as eye liner applied with a special stick tool from a Khol Pot to create almond-shaped eyes. This eye shape was to resemble the falcon eye of the God Horus, son of Osiris the God of the after life. Osiris was the son of Geb, God of the Earth and Nut,Goddess of the Sky. Osiris was depicted as having green skin.
Favorite colors for eye painting were black and green. Malachite is a copper ore that was used to create the green eye shade. This green was applied from lash line to under the brow.  Later the black angular Khol eye became more popular.
The Black Kohl eye makeup was thought to have magical protective powers to ward off evil spirits. It turns out the Kohl was more than magical it was also healing as Kohl helped prevent ocular infection and eye diseases often caused by the flooding of the Nile. The lead-based substances in kohl promoted the production of nitric oxide in their skin, which helped strengthen their immune system against diseases. The soot in kohl also helped in reducing the damaging effects of sun glare on their eyes. Of course these wonderful benefits were thought to be the magic in the makeup. Egyptians, especially royalty, liked to be depicted as art and in an ideal state of youth as part of their divine nature. Talented makeup artists were used to paint their faces into works of art for public appearances and to honor their beauty. Sacred oils like castor and sesame oil were used in their daily skin care regime to fight wrinkles and milk baths with rose petals became the legendary beauty secret of Cleopatra.

Here is an easy step by step to achieve Cleopatra beauty.

This can be applied to either a clean fresh face or as a quick change Egyptian look to add on to already applied standard stage makeup.

Bold Brows– Black (if you don’t have a costume change) or dark brown applied sweeping down at the sides of the face so the upper eye liner can meet at the brow in the outer corner.
Liner– On the upper lid using MODE DION Eye Liner Brush, apply the black eye shadow from the MODE DION 5 Color Pro Pallet line across lash line to sweep out and up almost into where brow ends. This creates the “Eye of Horus” for good luck. Apply MODE DION White Pencil at outer corner straight out between lines for separation.  Line black across lower lash line sweeping down at inner eye corner creating a “cat eye” which was thought to bring protection. Line to outer lower lash line sweeping down at outer corner for a “fish tail” look. The fish tail was thought to enhance abundance in life.
Kohl Eyes- Since Black Kohl was used as makeup, use the black eye shadow shade to create a very angular eye shadow application across eye just above eye crease blending out to where the eye brow ends. Ancient Egyptians also used a pigment for shadow that was an Emerald Green color. It was applied from lash line to under the eye brow. I found from a distance it closed the eyes a bit so I prefer the Khol look instead. Both are historical. Blend the edges of the black shadow with brown eye shadow to soften edges and look more polished. Warm the outer eye bone just a bit with a balancing warm shade to create dimension.

Add a little Glamour– Use MODE DION Shimmer Pot to lift features like at the center of eye lids, under brow arches and cheek bones. This enhances the facial bone structure and adds a little glamour to the look. Really shade the contours of the face. Just a little Stage Red cheek color on the cheek rounds.
Cleopatra Lips- Reddish orange lip shades were used in Ancient Egypt made from Henna. You can go with that shade using MODE DION Stage Red Lipstick with Russet Lip Liner or lighter for a more Hollywood version using glitter or Shimmer Pot on the lips.
Egyptian Glitz
If the costume is glitzy and you would like to step away from historical accuracy try a little glitter for fun and to help bring out the costumes detail. In the video I used MODE DION Gold Glitter on lips, at outer eye corner, inner eye corner and brow arch to tie in the costume.

GET THE LOOK CLEOPATRA